Just got back from camping at Yosemite’s Tuolumne Meadows Campground with my dog Chico.  Last year we camped at Yosemite Wawona campground, Dogs are only allowed on paved surfaces in Yosemite, and campgrounds, not on back country trails.  We will cover both experiences in this post with a lot of photos and waterfall videos.  Both trips we saw many dogs in the campgrounds, and in The Yosemite Valley. 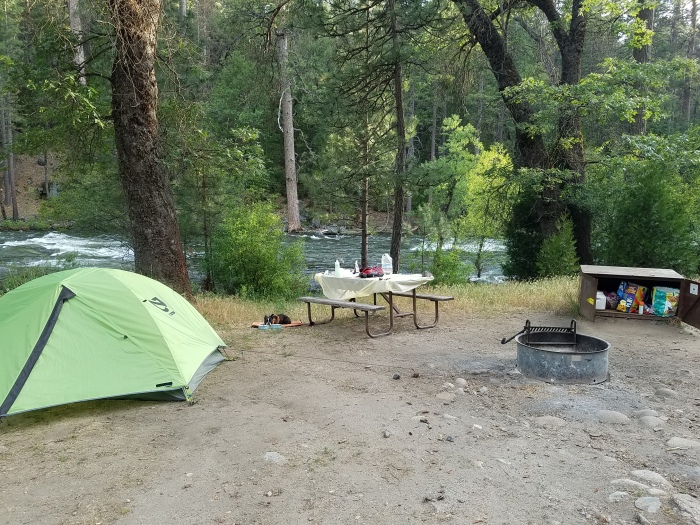 Wawona Campground, Next to Merced River

Last year we fully explored Yosemite Valley –which good or bad is mostly paved with tons of sidewalks and bike paths.  We walked 10 miles one day, and 7 miles the second day–with drop dead gorgeous views where ever we looked. It was 2017, the year that we had massive snow, and waterfalls and rivers and creeks gushed into July and probably beyond.   We also had lunch on the cafe decks!  Half Dome Village Pizza Deck    even has a walk up window! So I was able to order pizza without having to leave Chico alone, which is against park rules.

We explored Glacier Point and a couple other areas between our Wawona Campground and The  Yosemite Valley, dogs can walk the paved path right to a couple of the waterfalls!  And to Glacier Point–On leash of course:)  Glacier Point has a few paved walking areas with incredible views! And Ice Cream for sale! 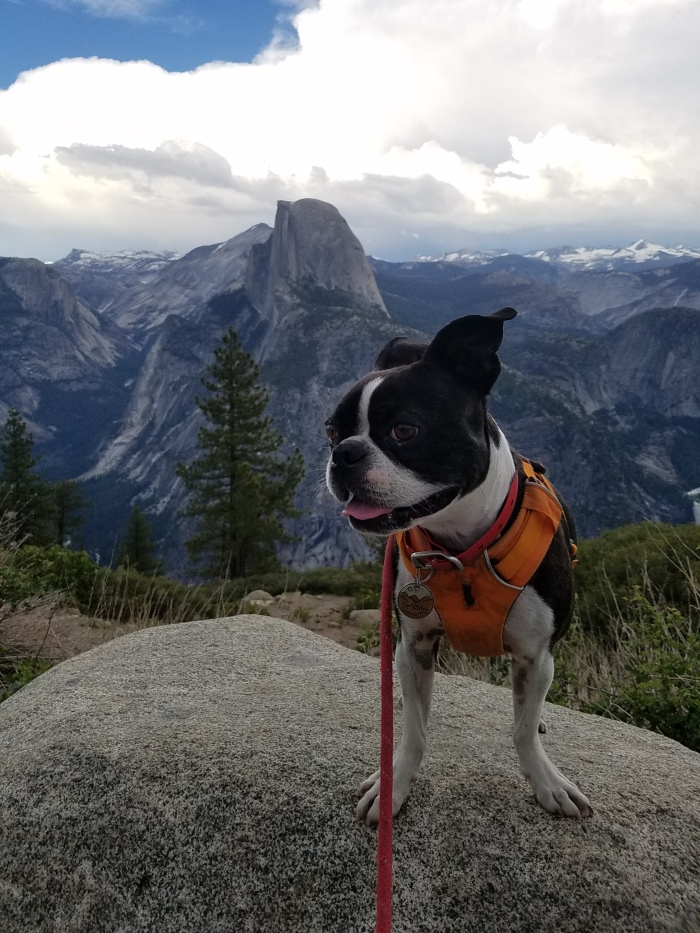 Bridalveil Falls has a parking lot with restrooms, and is a short paved walk up to the falls. When we were there, we woke early to do our walking before it got hot, and later in the day to cool off everyone would go to the waterfalls as you would get soak and wet just viewing them. It was awesome.  Bridaveil Falls always had rainbows, it was magical. 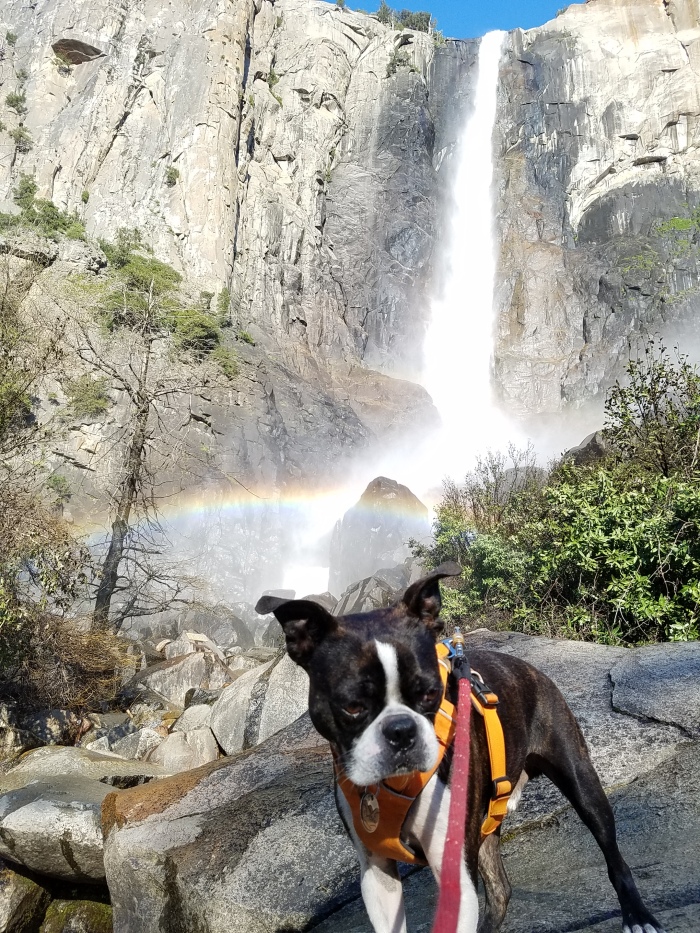 Yosemite Valley is made so that everyone can enjoy the views, including those with mobility issues, which means more areas for dogs to walk since all these areas tend to be paved. The area around lower Yosemite Falls has several different small walking path loops and shared bike paths, you can walk to the Lower Yosemite Falls via a few directions.  In July 2017 the steams and creeks seemed more like raging rivers, in July 2018, barely a trickle. Amazing what a difference one year can make.  The Lower Falls walking area is mostly shady, so we were able to enjoy this walk even later in the day when it was 85 degrees as the pavement wasn’t hot. 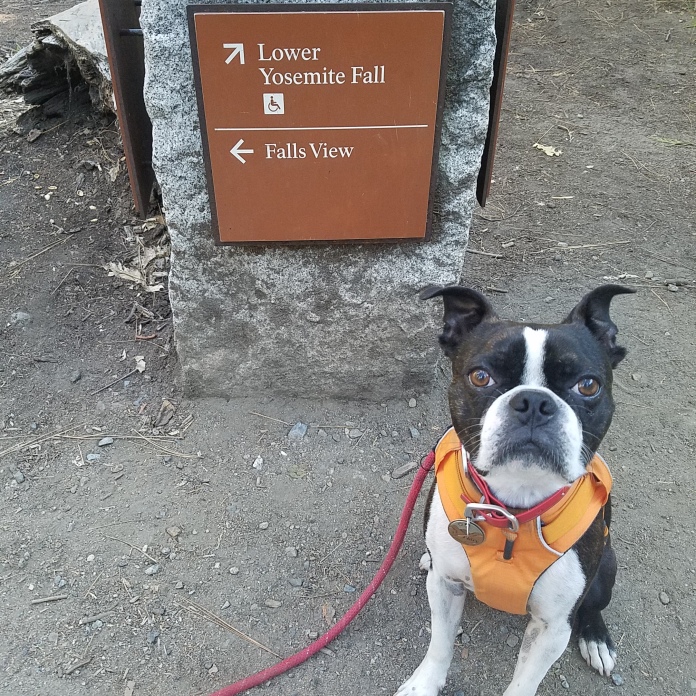 Near the Half Dome Village, is a paved trail to Mirror Lake, that you can pick up a few different ways, we started at the farthest point which is in between Yosemite Village and Half Dome Village. This is the closest to a hike hike that we did, even though it was paved we didn’t see anyone for the first mile and I started to get a bit nervous about bears.  Yes I am paranoid! 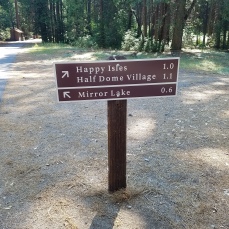 Dogs can walk all the way up a paved path all the way to Mirror Lake, and then you will see a sign that says, “No dogs allowed past this point.”  The water was roaring up to Mirror Lake, and on the way back we took The Valley Service Road Loop trail to Half Dome Village for some lunch.  I saw many sidewalks submerged under water off to the side of the road. We also stopped in the Happy Isles area which has some paved walkways. In total, we got in about 4 miles here, with some gorgeous scenery–not sure it would be the same in a dry year though. 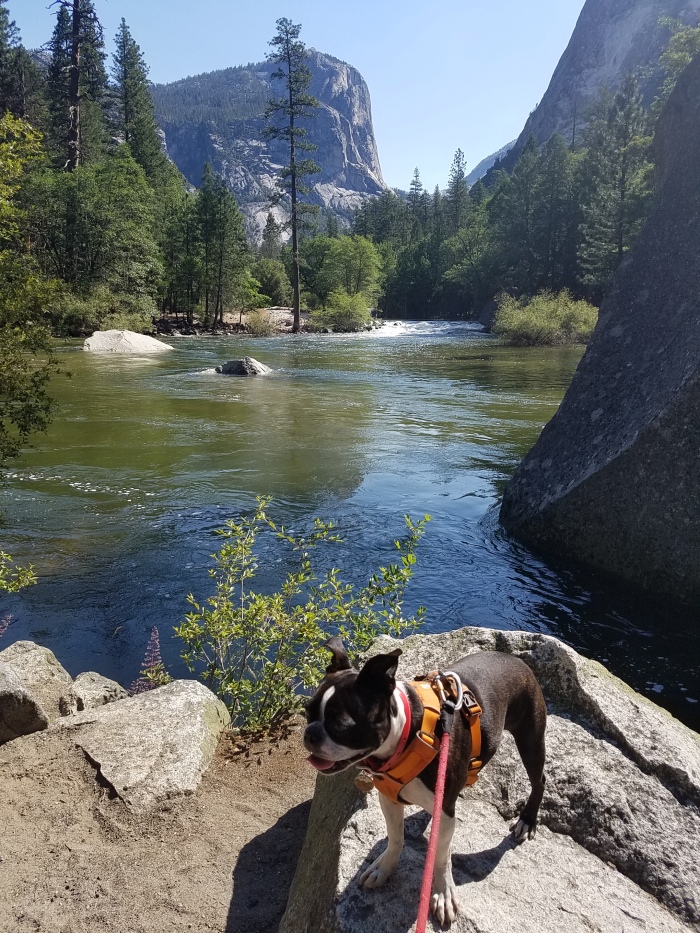 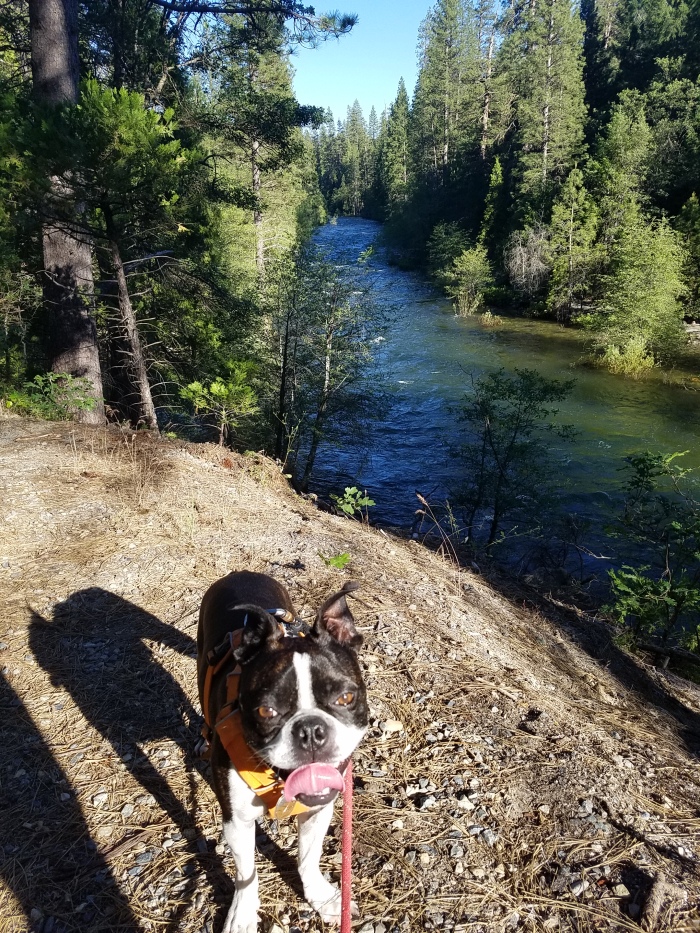 On the Trail to Mirror Lake 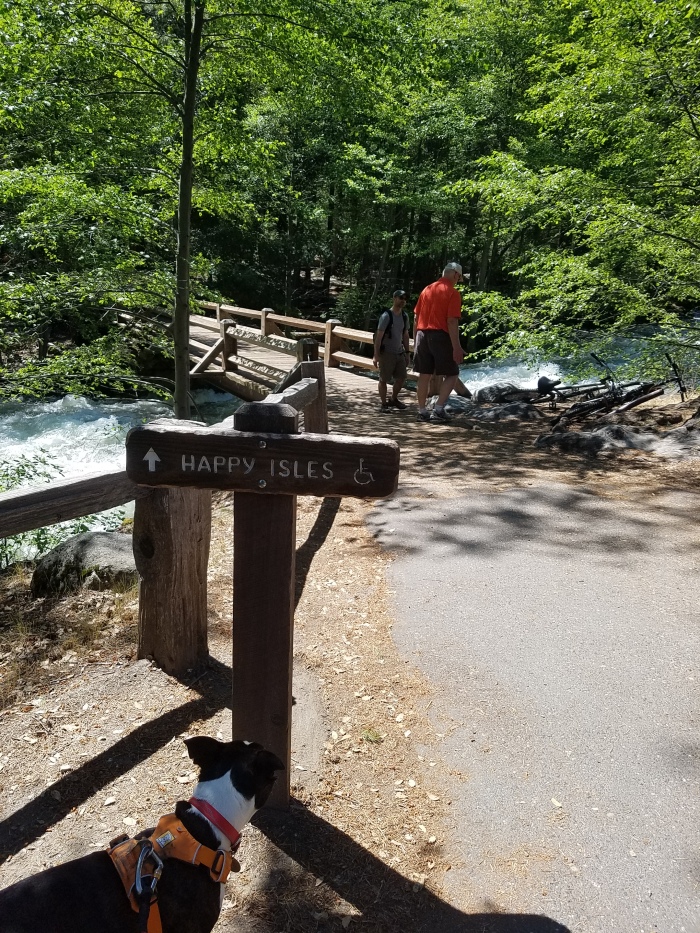 We got last minute reservations at Wawona for 3 nights last year, right next to the Merced river, got the reservations Monday of the same weekend we went, what luck! ( I picked up a tip to put dog’s meals on a place mat in bear country, in case they drop any bits while eating.)  Site 10 might just be the best campsite at Wawona!

And this year we also got last minute reservations at Tuolumne Meadows Campground, 4 days before going, in which sites were assigned upon arrival, and lucked out with a nice spot in Loop A near the river, no spots are on the river anymore, but you can see where they once were.  There are also First Come First Serve spots here, these seemed to fill up by 4 PM on this trip, though I have read that they fill up earlier.

Campers before us made an American flag for the 4th of July, out of rocks and acorns, pretty cool! 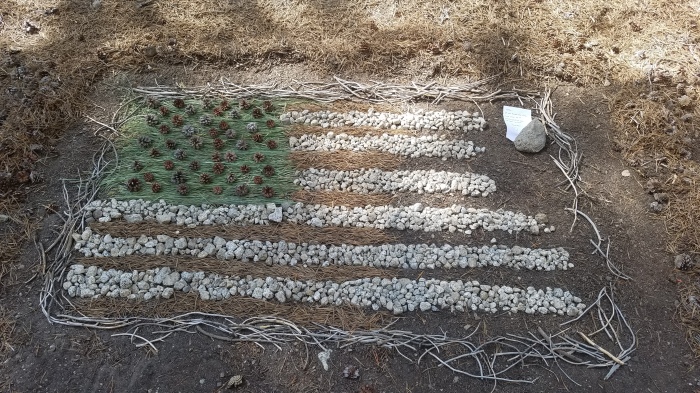 It was beautiful to walk by the river and Tuolumne Meadows every morning and every night, unfortunately I didn’t get photos of the gorgeous view of the Tuolumne Meadows from the campground road in Loop A.  We also took part in the Ranger’s Campfires at night, which might be one of my favorite things about camping in National Parks.  Across the street from the campground is a store that sells things for a pretty fair price, a lot of the PCT and JMT hikers resupply here, and the Tuolumne Meadows Grill is next to the store, where you can mingle with them, and even leave your change for a hiker who might need it.

Besides wanting to experience the beauty of Yosemite again, we camped here to explore Mono Lake and the Mammoth Lakes area which are about 30 to 45 mins away depending on where you are going.  We had some excellent coffee at Mono Cup Coffee then spent the day exploring.  Mono Lake looks like it has tiny castles for tiny sea people, and a million black flies that lie on the surface at the edge of the water…which fly up at once when you get near them, as Chico found out lol! 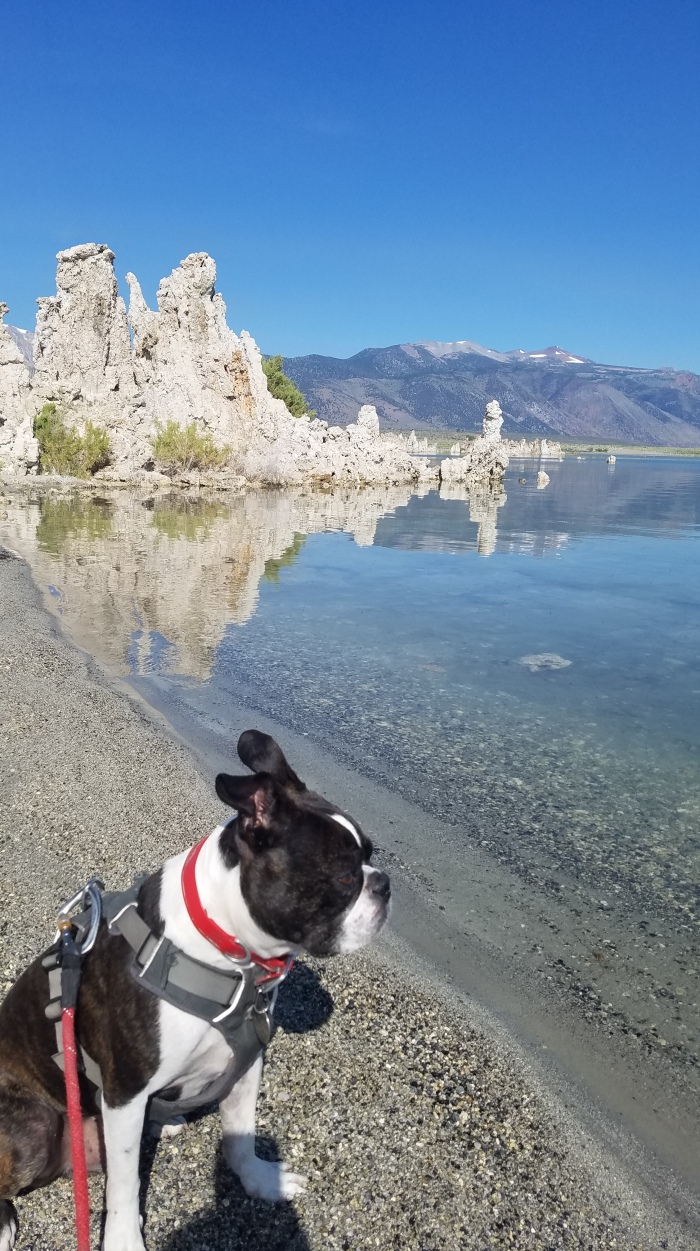 I had never seen the Eastern High Sierras before, and also I knew it would be 20 degrees cooler to camp at Tuolumne than actually camping in Mammoth Lakes somewhere

.  I plan to camp at all Yosemite campgrounds that allow dogs someday as a couple of them have really old closed down park roads that dogs are allowed on, like Big Old Flat Road. 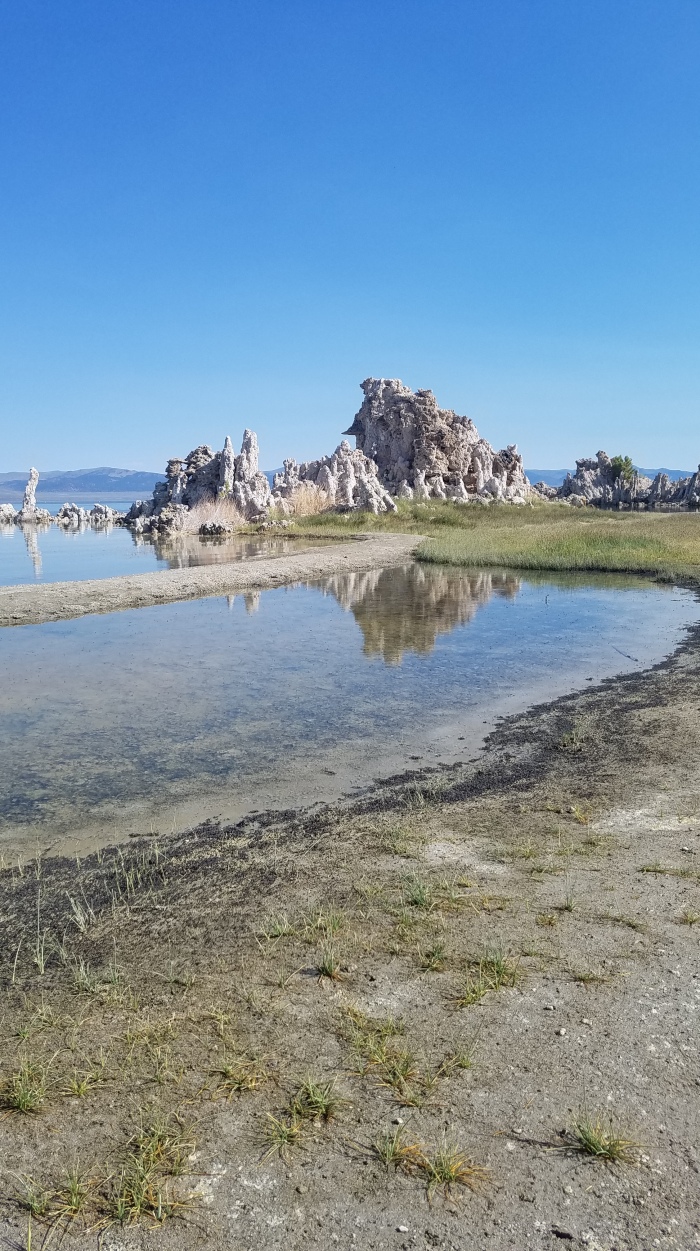 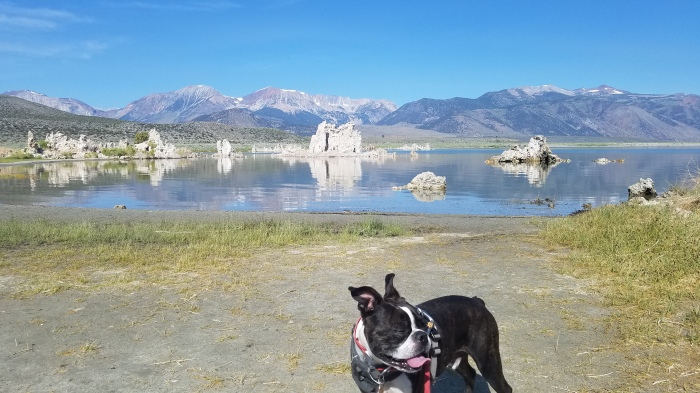 The Drive on Tioga Road and through Tioga Pass, is worth it alone, so beautiful, and not as scary as I thought! I am afraid of heights!  Believe me, before  going I did so many searches for Tioga Road accidents, and asking how scary Tioga Pass it is lol.

Convict Lake is about 15 mins from Mono Lake, it is a small lake with a beauty that is hard to capture in photos. A roughly 2 mile trail goes around the lake, and lot of people fish and kayak there.  There are many other lakes in this region, some with Kayak Rentals.  We didn’t get to do all the scenic drives, or even explore all of 395, so hopefully we will make it back one day. 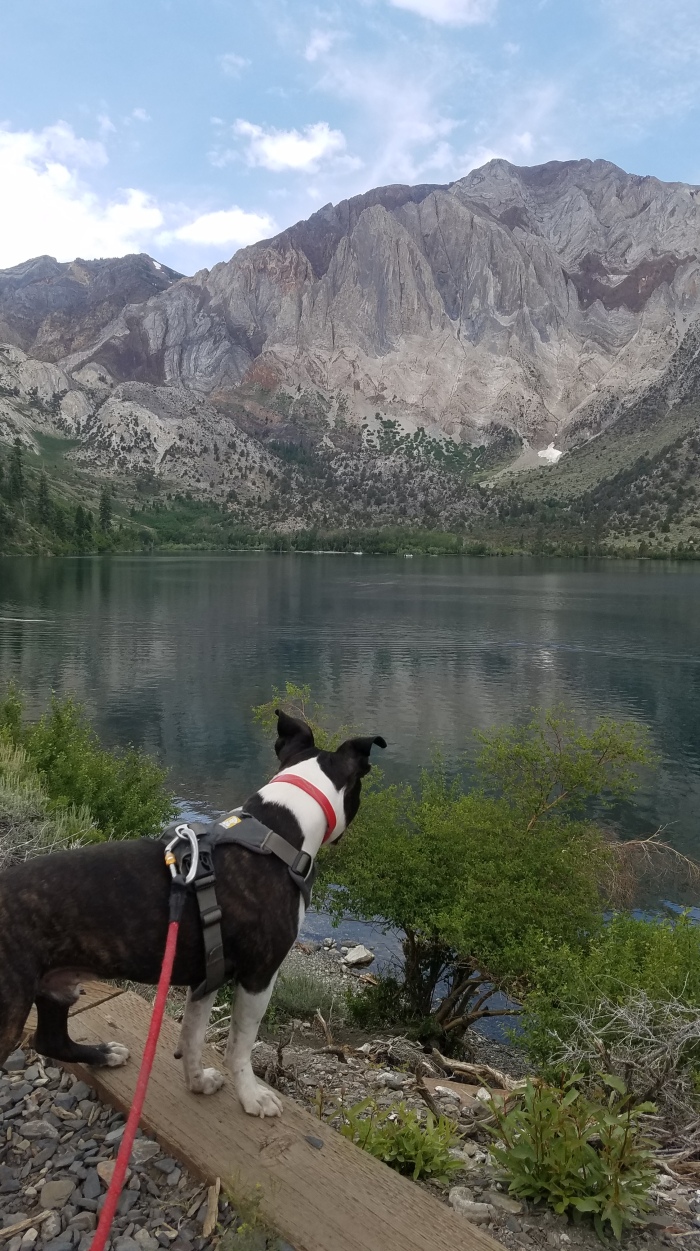 There are some gorgeous pull offs on Tioga Pass Road, many are all paved so dogs allowed to get out and do some sniffing, and also right outside the park on the way to Mammoth Lakes are some great views and some trails. 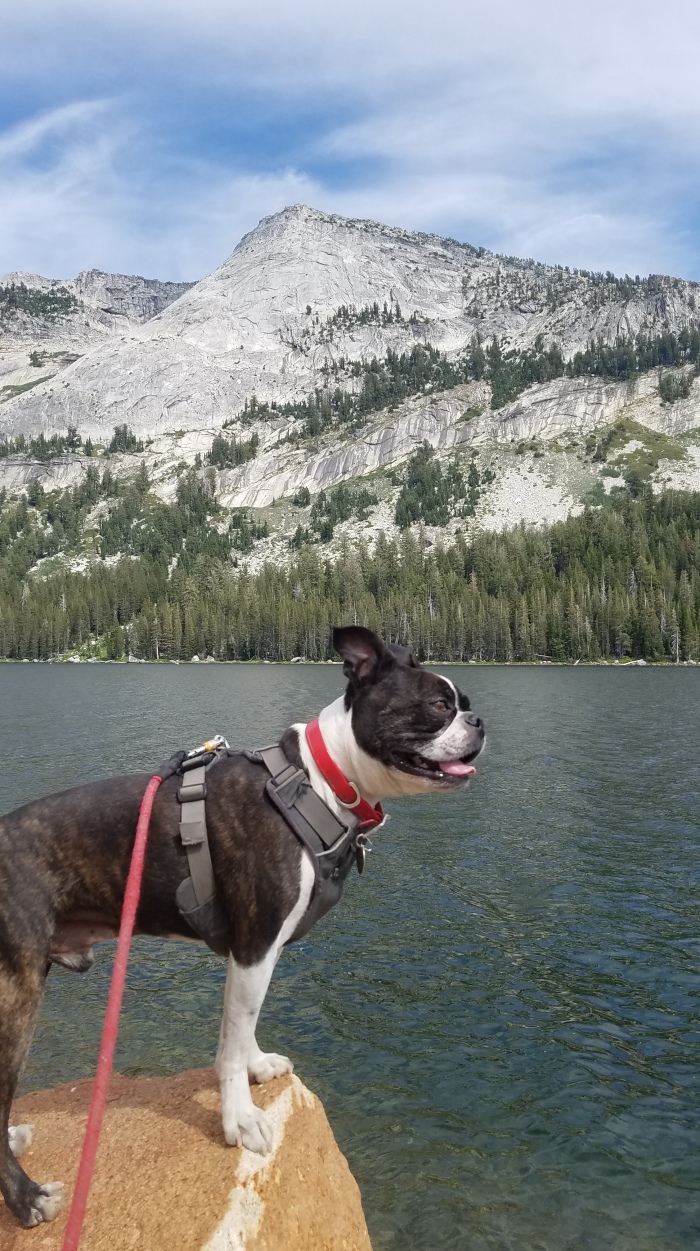 Back to Yosemite….Tenaya Lake on Tioga road, has a sidewalk that runs next to it for a bit, maybe 1/3 mile or a bit more.  Not a long walk, but it is so gorgeous. Dogs are also allowed in the developed picnic areas, you will see signs clearly marking at which point dogs aren’t allowed to go further.

I had a great time both trips to Yosemite with Chico.  I was fine with just seeing all the  touristy stuff and doing the scenic drives, they really took my breath away.   Standing in Yosemite, I felt like I was in God’s Cathedral.  I know Yosemite today, might not be like John Muir would’ve liked it to be, but I thank him over and over for all his hard work in the state of California to save our beautiful places.  I also thank Teddy Roosevelt, Stephen Mather, Frederick Law Olmsted,  Frederick Law Olmsted jr, and a million other people who have made the National Parks possible over the years.  If you get a chance to watch the Ken Burns National Parks series, do it! So inspiring! 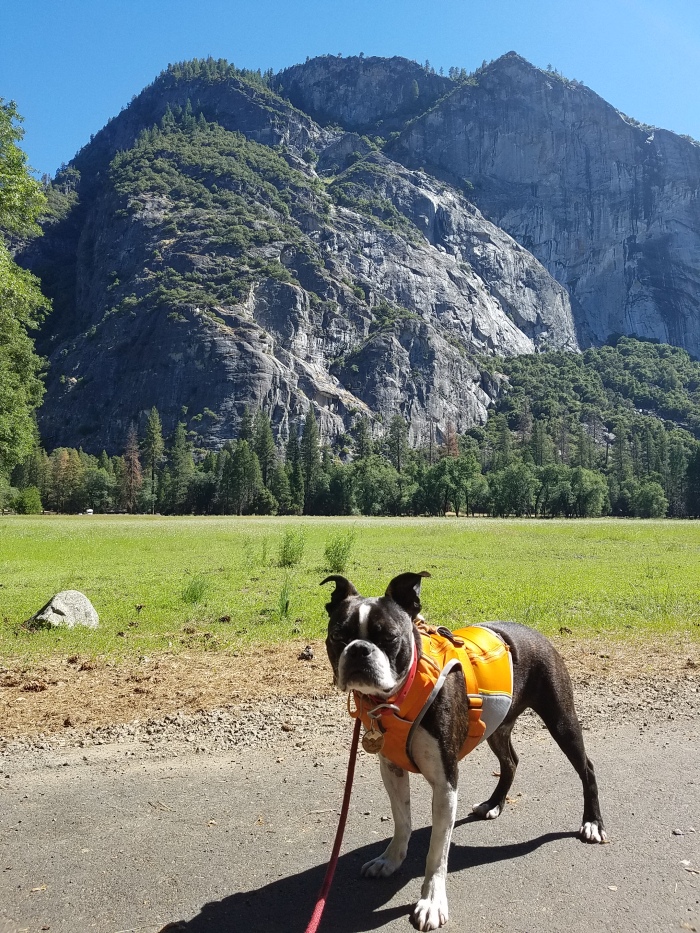 I’m tired of these mountains photo bombing me!

I don’t feel like I missed out on anything by not being able to go back country with Chico.  But, I do go hiking quite a bit, to some pretty amazing places.  If you are someone who takes a few trips a year to go hiking, and you want to stay away from the crowds, then a Yosemite with your dog might not be for you, though there is a kennel available at the park.  I personally loved seeing all the families from all over the world enjoying Yosemite, and all the other National Parks I’ve been to.  I love being a part of the crowd, as much as I love being alone.  I don’t think that we can save our National Parks and Forests, by being elitist about them. I want everyone to fall in love with them like I did, so they will want to protect them too! 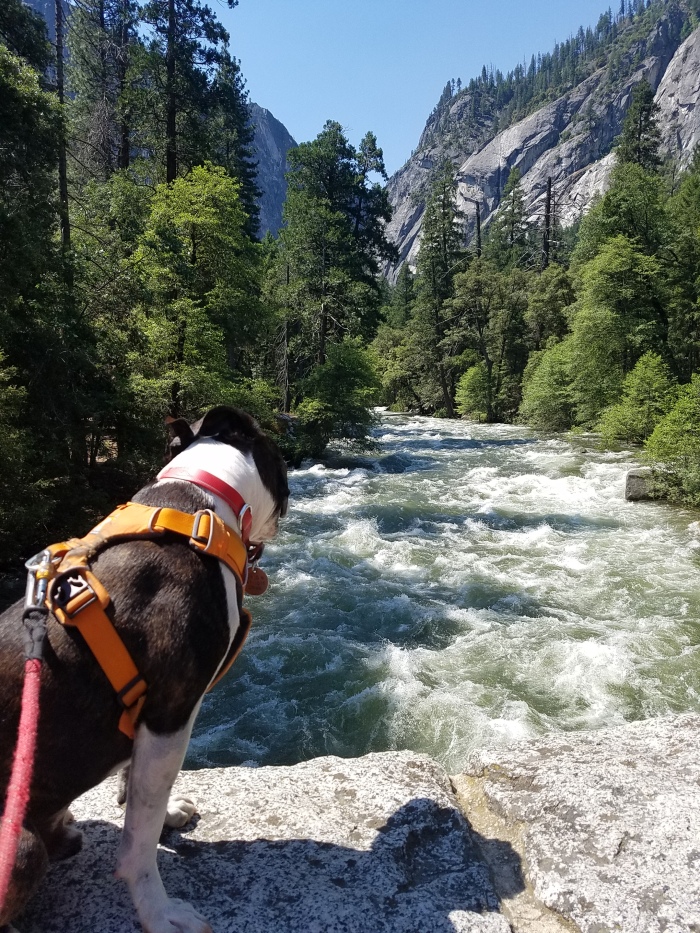