Just wanted to take a quick minute to give a little review and to say that we love the Ruffwear Swamp Cooler, as we know many of you are looking for Cooling Coats and Cooling Vests.  We will write a full review after testing a couple more things…like playing fetch in it!

I was skeptical at first, and really dismayed that there isn’t a leash D Ring, but I needed something for our 14 mile round trip hike to Murietta Falls n the Ohlone Wilderness  since we were going late in the season and it would be sunny and hot in the afternoon. Being leery that it actually would make a difference I bought it at REI knowing that I could return it up to a year. But wow!  It actually works!

I used an old comfort flex harness over it for our try out hike, and then no harness for the Murietta Falls hike. I didn’t want to use the Ruffwear Webmaster Harness over it as I wasn’t sure it would still work as well, however before I left for my hike I wrote to Ruffwear  asking about this combo, and when I got back from my hike,  I got an email  and they assured me that many people use the Ruffwear Webmaster over the harness in 100 degree weather. They have such quick customer service!

Back to the Ruffwear Swamp Cooler and the long hike.  When we started out it was early morning and only 55 degrees, so we packed it up as well as a spray bottle of water, the Swamp Cooler is pretty light weight and it works on evaporative cooling, so it needs to be wet.  When wet, it isn’t that much heavier, and certainly not anywhere near as heavy as the Liter of Water that Chico sometimes carries in his pack.  At about noon it reached 75 degrees so we pulled it out, sprayed it down,  and I noticed a difference in Chico right away.  We wet it down a couple more times at streams, and wrung it out as best we could.  For the rest of the hike, he didn’t seem hot at all, and most of the hike he didn’t seem tired, only near the end did he seem tired, but, that had to do with our 14 mile hike, as it was our longest so far. His muzzle didn’t get flushed or pink at all, and his panting was just happy dog I’m hiking panting, not heavy panting.

The next day it was 85 degrees in my city and we were able to walk without him wanting to turn around and go home after a block.

No pink in his muzzle, and he gets pink just playing games usually!

Having a Boston Terrier it is very important for me to keep him cool because his smushed face makes it harder for him in the heat.  Really, at 68 degrees on a super sunny trail, I can see him getting hot because he also has a mostly black coat.  I love that the Swamp Cooler opens us up to do trails that I would usually avoid on warmer days.  I will have to test it with the Ruffwear Webmaster, and then write a full review. 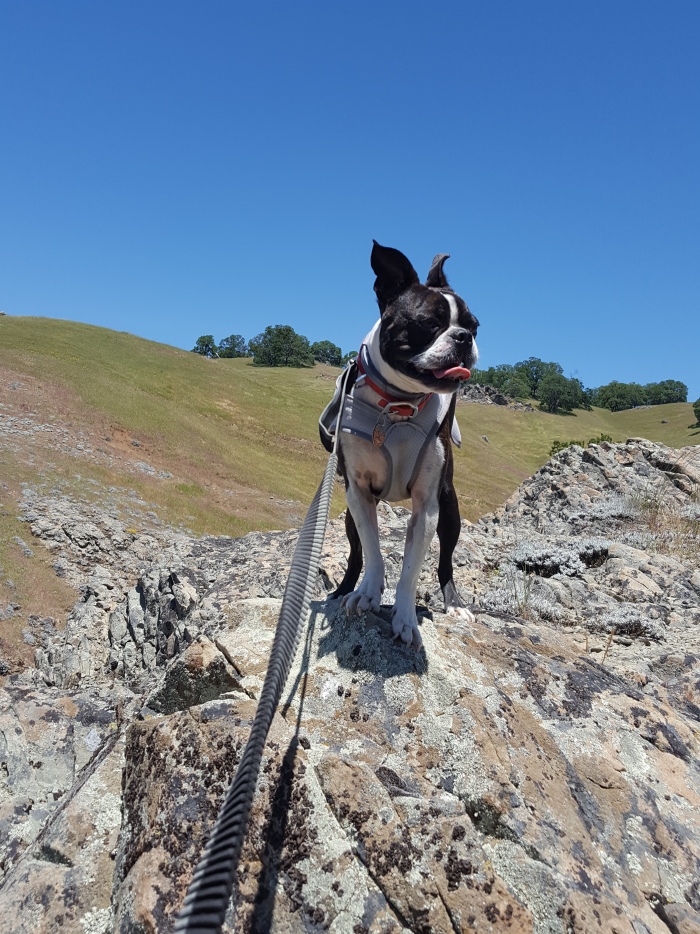 Chico is between Ruffwear Sizes as he has a 22.5 Girth, he wears an XS in the Ruffwear Swamp Cooler, but a Small in the Ruffwear Webmaster.  Some people say it doesn’t work as well in humidity, and works better on dogs with a short coat. But some people also say they work great in those conditions, it might depend on the activity. If you live in a humid area, I’d read the reviews on Ruffwear and Amazon and look for someone who has the same kind of dog as you, and lives in the same area.

2 thoughts on “We love the Ruffwear Swamp Cooler!”