Chico and I visited Briones Regional Park for the first time last week. What an awesome park for dog lovers! So awesome that we goofed around and didn’t even get to Briones Peak and Table Top Trail like I had planned.  I had seen photos taken from Table Top Trail of Mount Diablo, and it was my plan to do a hike there and take some photos as well. But It was hot out, the trails we wanted to take were all in direct sunlight, and I didn’t think we had enough water after playing around on other trails first.  Briones is all off leash ( except some areas where marked, and within 200 feet of trail and park entrances) and there are so many wide green spaces to run in, wide fire road paths with no crazy drop offs, and surprisingly it seems to have the lowest trail population of any of the parks I’ve been to.  This blog entry will cover our 4.5 mile In and Out to the Table Top Bench. 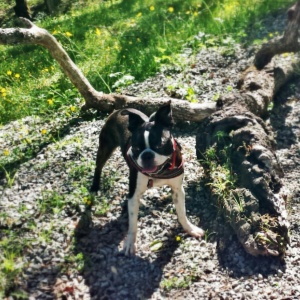 We parked at The Old briones Road Staging Area. Unlike last outing here, for this hike, I chose to keep Chico on his Retractable Flexi Explorer leash to conserve on water since I figured we would do about 5 miles, and possibly more.  If you don’t already know, a dog who is off leash and orbits will do 2 to 3 times the miles as it’s hooman, thus needing more water, and for longer hikes more food. Also, flat faced dogs can have a harder time with heat. There was also the coyote question.  They have been sighted here recently, even in the middle of the day. At 25 pounds I worry about him, tho others have assured me that he is so fast he could out run a coyote…but would he? Or would he try to defend?   And then snakes! later on that!

So we had our plan and extra water since we were going to be hiking uphill to the 1483 ft Briones Peak, which doesn’t seem like much, but we probably used most of our water on the uphill portions. This time I used the Briones Road staging area, as it seemed fairly straight forward to Table Top Trail from there.  I wasn’t sure if we would do a Loop or an In and Out, and this seemed conducive to both, as well as extending our hike in other directions if we wanted.  We would be using Old Briones Road Trail, and Briones Crest Trail which are part of the Ivan Dickson Trail, to get to Table Top Trail. This staging area is the least used of the park, and down a long winding narrow road and is fun to drive!. There is water and a bathroom at the entrance, and cars park on the side of the road, there isn’t an official type parking lot except for 2 handicapped parking spots. There were 4 other cars parked there on a weekday, so I didn’t feel totally alone in case of an emergency.

We headed out on the Old Briones Road Trail at the south end of the staging area, by the water fountain. This portion is mostly shade, or is at least shady at the edges.  Not far in we caught our first and only glimpse of the day of cows grazing below in an opening in the trees. Many areas of Briones are grazing areas for cows.  We passed them on a previous trip, inches from the trail, and they just ignored us.

A little further in and you’ll come to a bench over looking the valley below, I was more intrigued with the hill to the left, and it’s wild flowers, and thought perhaps we would climb that on the way back.  All over the park you will see skinny paths like this splintering off the main trails.

At .08 miles in we came to our first grazing gate (my mileage might be a tad off as I started both our apps at the car)  on the other side of the grazing gate there is a fork, both short forks lead up to Old Briones Road Trail, the one on the left will take you to the trail marker and a little fenced in Newt pound. The one on the right just lets you bypass this if save a minutes time. 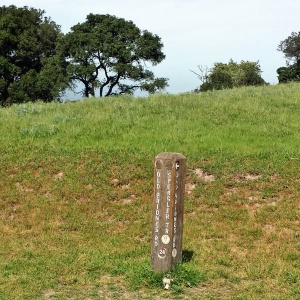 Once you go out this gate, it is almost all direct sunlight to the Table Top Trail.  It was easy to get lost day dreaming, it’s so breathtaking up on these trails. And you can hear many types of birds. Sorry I’m not a birder so I can’t tell you which kinds, that is on my to do list:) 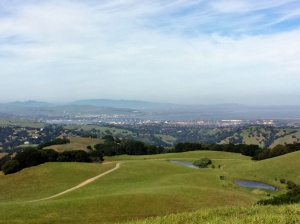 A tiny ways from the above marker we went thru a gate to take a photo of some wildflowers, and then came back and went on Briones Crest Trail.

On Briones Crest we could see an offering of shade from the distance, a lone tree. And we spent some time relaxing under it, wondering about all the others who sought our shade here.

A bit up the path from the lone tree we saw a large rock formation on the left, there were little newts I think, crawling on some of the rocks, so getting a good photo was hard! 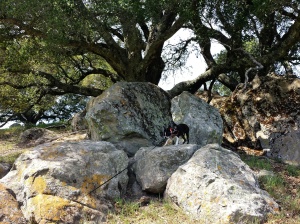 A bit further up from here, we saw a small splinter trail go up to the left to a bench, but that wasn’t the Thee Table Top Bench, it was the Briones Peak Bench overlooking the Carquinez Strait, which I did not get a good photo of, but I did get one of the Bench which you get thru by climbing thru a fence.  I know it seems silly to be focused on a bench, but, for me having a destination to something helps keep me going.  Be it a simple vista, a bench, or a cave.

From here you can see a little path that cuts across back to Briones Crest Trail so you don’t have to walk all the way back down, and a little ahead, you see the trail surrounded by trees, and your first peak at the Table Top bench with Mount Diablo saying Hi in the background. 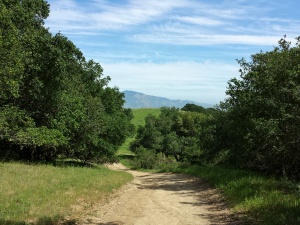 There will be a trail marker just before the gate.

And once you are thru the gate, that is your destination, tho Table Top Trail is a bit longer, the bench and vista are right there.  Enjoy the awesome views, relax a bit. There was a marker next to the bench that looked Drudic to me, or like something out of Dungeons and Dragons.  Not sure what it’s for, or if it is always there. 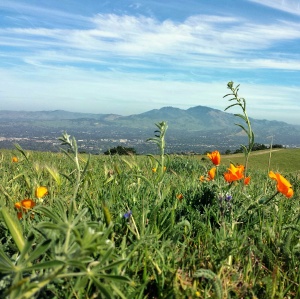 I decided to just go back the way we came. From the map, I couldn’t really figure out just how much longer it would be to do a loop, or which trails to take, and it was 4 PM. Besides I loved the scenery so much I wanted to see it again, and I saw some stuff I didn’t see on the way up.  We also had a surprise!  When we got back on to Old Briones Road, just as we were passing the bench I saw a snake!  Right on the trail! It looked like a Rattle Snake to me, as it was flat and matte, not glossy.  Chico was a few feet in front of me, and walked 2 feet from it and didn’t even notice it.  I think we got lucky, and I was glad that I had him on leash in case he did suddenly notice it. When I zoomed in on the photo later, it indeed did look to be a rattlesnake.

I would say that this is a moderate hike, due to the slight elevation, and the direct sunlight.  Most of the paths are fire roads and quite even and easy to traverse, but are a bit rocky or have deep ruts in some places. I saw a few other hikers and bikers out there, most with dogs:)  And there were horse hoof tracks as well as that tasty tempting horse poop for Chico on the trails.

Here are my All trails and Walk a Dog screen shots.  I am not sure that these do total footage/ miles, I think they just match you to a known trail already in their program, as my pedometer always measures more, and the All Trails app said 4.53 miles before I saved it, and the Walk a Dog seems more off.  Maybe because there is not always service for GPS access. My pedometer said 5.1 miles.