**As written about in previous posts, I’m doing the East Bay Regional Parks 2015 Trail Challenge, they have 5 easy trails, 5 moderate trails, and 5 hard trails.  I’m doing them all in order from Easy to Hard. This is the second easy trail. **

Since this trail started at Crab Cove we put this little sun hat on Chico for a bit:)

Even though the starting point of this part of the trail challenge was only a few miles from my house, I had to wait  a couple weeks to do this trail because it got abnormally hot here, some days were into the 90’s, and that is quite rare by the Bay, summer is mostly 65-75 degrees–unless you go inland.  This trail is mostly in direct sun, and it is paved with blacktop/asphalt, which can be too hot for dogs paws over 75 degrees, though much of the trail does have grass or dirt next to it to walk on instead. So finally an overcast 70 degree day came around!  This was my chance to do this odd trail / hike. This trail is all leash only.

What made this trail odd for me, wasn’t the “sea path” that ran behind condos next to the bay, I’m used to that from doing the rest of the Bay Trail in Alameda quite a bit, it was the .8 of a city block and the alley like service road to connect to the The Bay Trail/water again.  This was an out and back, not a loop, and we did about 4.5 miles tho the guide is listed at 4.12.

The highlights of the city block, which were worth it to me because I just moved to Alameda, were finding Wilmot’s Books, a jet plane suspended in air at a school, and in a driver’s ed parking lot visible from the service road there were a bunch of smashed up cars.  The architecture on this block of Central Avenue is rather drab, you can pick out some old summer cottages here and there, but much of it is that 60’s and 70’s bleh, or old cottages that have been added onto so much it’s hard to tell what they originally were.  There also is not one cafe or store along here to stop for a drink or a snack. That said, the rest of the trail is wonderful, I love walking next to The Bay. When you are done, go the other direction on Central Avenue to see some fabulous Victorians, and then get something to eat on Park Street 🙂  And, I do understand that they can’t do the same trails every year, and that they are trying to show a variety of the wonderful parks we have here in the Bay Area. Oops I got ahead of myself!

For this  easy hike, You start off at Crab Cove, this is an amazing place with organized activities, most of them activities for kids. There is parking lot here, and I went on a Friday and no fees were being collected at that time.  There are also restrooms and water near the start. This hike has you go to the right, I imagine that in years past the hike went to the left, I do the left portion all the time, and since there is water available almost every 1/4 mile, I thought there would be on The Bay Trail section for the challenge hike, I was *wrong* and I didn’t bring enough water, I ended up giving Chico most of my water on top of his, as that city section was much hotter than walking by the water where it is quite breezy. 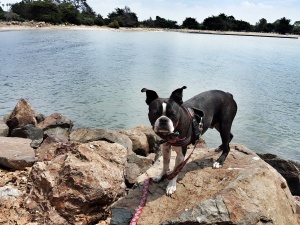 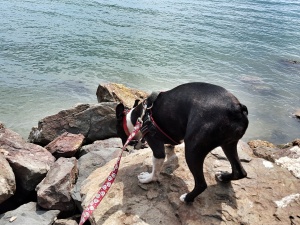 You go through a small gate and enter a residential area, the Sea Side Path. 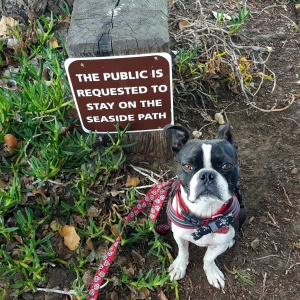 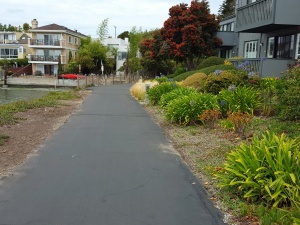 Keep walking past a couple intersections, one of them went back towards the water and advertised a restaurant, perhaps worth exploring on another day, it seemed like a pretty far walk in.  Keep walking past the Jet Airplane

And then you finally come to this fence–not so attractive, I guess it’s like urban hiking though. 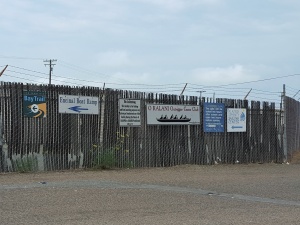 This is the view looking down the service road

The smashed up Driver’s Ed cars 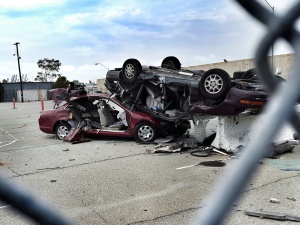 And then finally you come to a picturesque scene of a lone dock jutting out into the Bay!

The Alameda Sailing Club is on this part of The Bay Trail, there were kids taking lessons as we walked by. 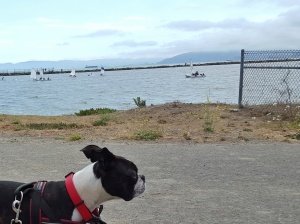 Once you are back on to the Bay Trail, you can see the big Naval ships lurking in the distance, including the USS Hornet Naval Museum.

You enjoy a nice little walk with several history tour signs along the way. Earlier on the trail, there were “Story” posts that had barcodes, once scanned they immediately popped up a web pages with all sorts of information about the area you were standing. I could read them because it was overcast and I have a good screen for my phone that cuts the glare.

There are some abandoned buildings, and remnants of old rail road fixtures.

Behind Chico, on that super lush green grass, are ducks twice the size of him!!! maybe they were Geese but they had the same coloring as ducks.

And then you get to the ships….It is really hard to do these justice in the photos, some of them were so large they seemed like a building, not something that could travel and float on the water.  Also, I wasn’t quite sure if I was supposed to be taking photos…There was all sorts of elevated alert signage, and signs saying no bags larger than XYZ, and military people walking around. 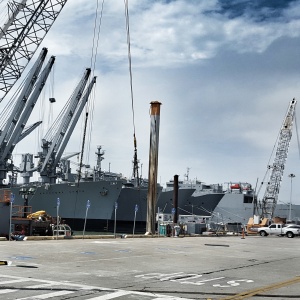 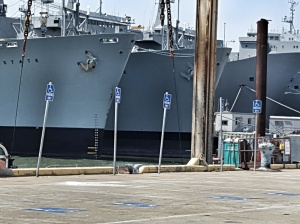 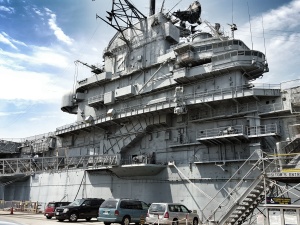 When you are done exploring, turn around and go back.  I can see myself driving to the Sailing Club Area and walking that part of The Bay Trail again, maybe exploring the abandoned buildings…but I don’t think I will walk there again:)