Let’s see where did I leave off ?  Oh yeah, I got stuck in a massive rainstorm in Nebraska, and had to stop, and I chickened out on putting up my tent in the rain, and got a Kamping Kabin.

Originally I had planned on staying at an Army Corps of Engineers campground in Iowa on night 3 so we could take a nice hike when we woke the next day, but we stopped in Nebraska because of the rain.  When we woke up we walked around the Omaha Nebraska KOA, which was pretty nice, but, we didn’t have time to explore the area since we were behind schedule because of the early stop the night before.

KOA Kabins are standard, and all seem to come with the same porch swing

I also had it in my head, that maybe we would still stop at one of the Iowa Saylorville Lake areas and do some hiking…but the skies were threatening more rain, and the traffic was slow, so it was a no go.  And then when we were almost out of Iowa it did rain, however we managed to be mostly  in the eye of the storm or between two storms so even though the roads were wet, we didn’t hit any real rain until we were almost out of Illinois, YAY!

And I broke more rules I made for myself…we hit the Chicago area around rush hour, traffic was sloooow! I drove 14 hours this day, at night, and during heavy rain, because I just wanted to get to my parents house in Michigan.

Once in Michigan, people drove like maniacs even though it was pouring down rain. Construction signs were everywhere warning people that traffic would be at a dead stop, and yet they would come up 90 miles per hour and slide and skid in the rain trying not to rear end people.  We came very close to being rear ended, but a Semi that was one lane over, pulled behind us as much as he could, and the speeding car driver slammed on his brakes, and came to a stop on the shoulder. This was also the only time that Chico happened to be in the back seat instead of the front seat, and also not wearing his seat belt.  I love that Semi Driver right now!  After we had eaten, Chico really wanted to go in the backseat, and I had thought to myself, “This is Michigan, I grew up here, I feel safer now.”  Haha, I forgot how people drive:)

People often worry about solo travelers camping and hiking alone, but, the freeway really is where the most danger is. So many people looking to get someplace just a minute faster, causing accidents.

When I grew up in Michigan, nothing had really been done to this area. There are 3 miles of Lake Erie shoreline and really nice dirt and paved paths here now, with many little wooden bridges over the marshlands. Even platforms to sit and watch the freighters on Lake Erie.  Everything was so green compared to California, and it was great to spend some time with my parents here. Lots of waterfowl as well, but I didn’t get any photos.  Oh, there is also a boat launch here, and my dad likes to come and watch the boats.  There is also a museum, and a seasonal refreshment stand. And giant Lily Pads! 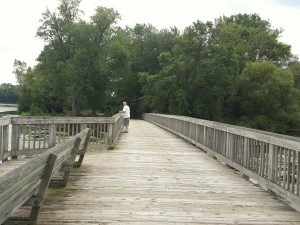 This is the largest platform we came across, with a really long bench in the center of it to observe the lake.

This mushroom is so perfect it looks like someone places it there.

There are many benches along the paths, which my dad liked, as he would walk ahead while we took photos, and take a break:)  I am so glad that this area exists near my parents house, and I look forward to go back every visit.  Most of it is dog friendly.

When I was looking for a campground near my parent’s house, Sterling State Park came up, but it had no shelter and was in pure sunlight, and a pretty hefty daily fee for non residents. Another place wanted $10 more for a view of the water.  I thought to myself, wow, this is ridiculous, my parents live on the water, so I camped in their backyard, and woke up to a beautiful view of the canal everyday–which for some reason I have no photos of.

I still wanted to check out Sterling State Park, and my dad likes walking there as well. We tested out Chico’s new Air Head life vest that my dad bought with the promise that we would return to use it:)  It was off season, so not many people were there, and we went down to the end of the beach where no one was in sight, as yes, I broke the leash rule, something I rarely ever do. I knew that he would listen, and that he had already taken care of his morning business. I wanted my dad to see Chico in action.  The waves were pretty intense! 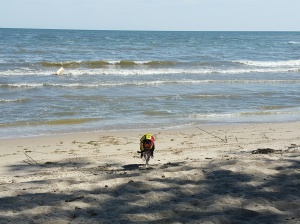 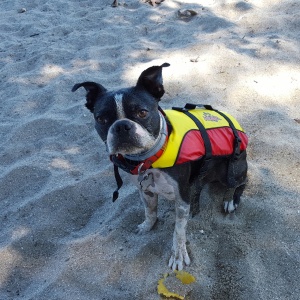 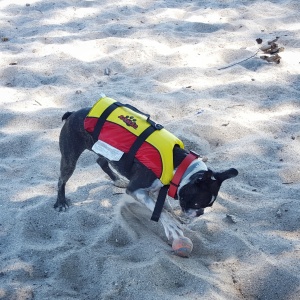 Chico likes to roll the ball to clean it off.

Sterling State Park is all in the sunlight, but, some of the tent sites have fantastic views of Lake Erie.
When we got back, we took a nice pontoon ride up and down the canals of Gibraltar, and Chico really wanted to jump in the water.  It took him til he was over a year old to actually really go in the water and fetch, he used to just wait for the waves to roll his balls or frisbees in.  Now, he sees water and he wants to go swimming.

Next up Mackinac Island.  And then South Dakota/The Black Hills, Deadwood,  reviews of the budget gear I used, reviews and impressions of campgrounds,  how staying at a campground works, and safety.