With the record breaking warm weather in California this February, I have been hitting new and old spots almost everyday for the past 10 days. So nice after all the rain and cold weather we had in December and January, and the parks are a green that I have never seen before.  One place that I always wanted to hike, but for some crazy reason never made it to, was Diablo Foothills Regional Park. Wow, this park is gorgeous! And there are many dog friendly loop possibilities, I have been itching to go back already! 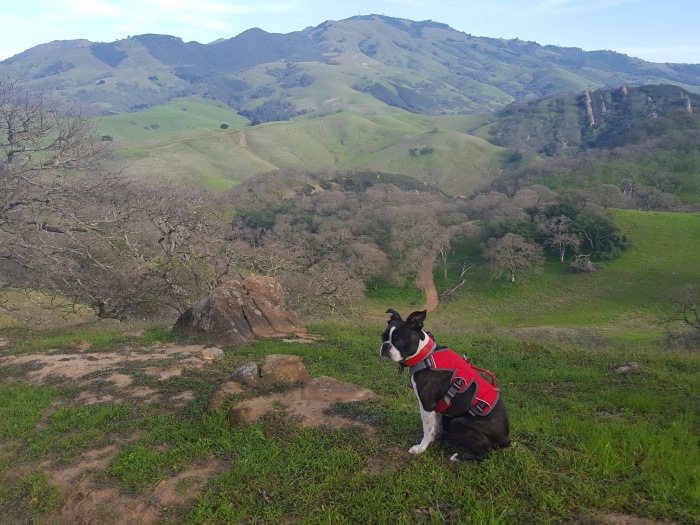 On this hike I did something I don’t normally do the first time at a new place, I just drove there, picked up a map, and then decided which trails to take as I was going. Usually, I plan which trails I want to take ahead of time.

We parked at the Castle Rock Recreation Area and the loop I did was Stage Road Trail, Buckeye Ravine Trail, Fairy Lantern Trail, Shell Ridge Trail, Diablo Scenic Trail back to the parking area.  The hike was around 4.60 miles with rolling green hills, good ascents,  a descent that made me start shopping for some trekking poles, some single path shady trails, and  views of Castle Rock where the American peregrine falcon nests.  Castle Rock Staging area has restrooms and running water, and the park is mostly off leash I believe. 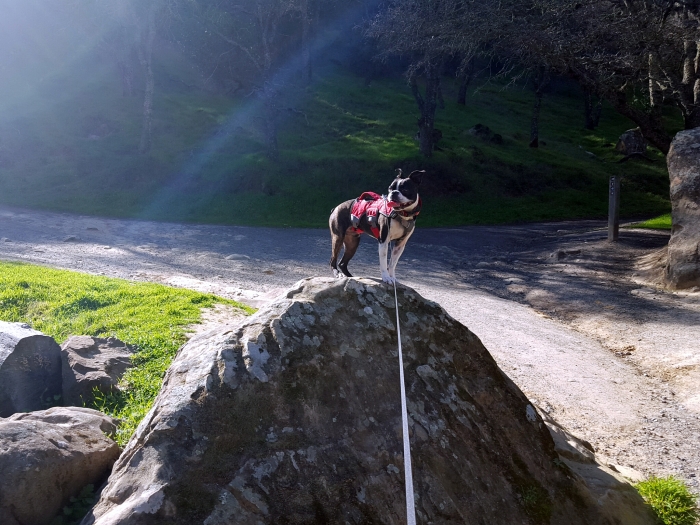 After parking, you walk through a nice area with restrooms, several picnic table areas, bridges, and then you come to Stage Road Trail. This was a tad confusing for a moment as when entering the park, signs said this trail was closed because of the American peregrine falcon nesting, and then later signs said it was NOT closed. 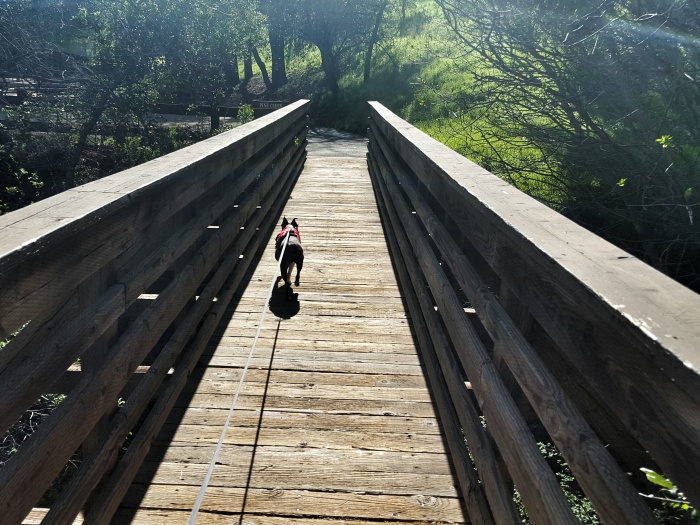 So we hopped on Stage Road Trail, we ran into a guy and his pooch returning down the path, and asked which trails they liked.  He recommended Buckeye Ravine, saying the elevation climb was well worth it.  On Stage Road trail there are some cool rock formations. 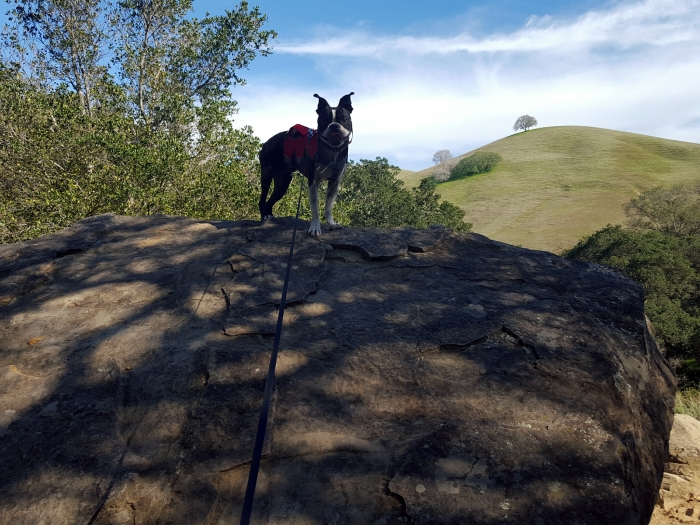 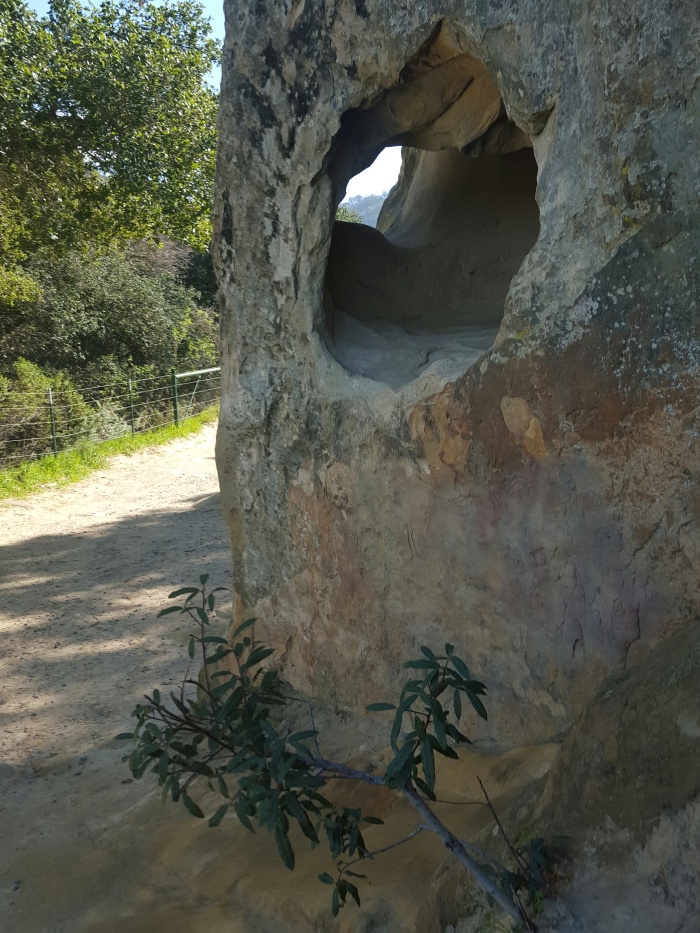 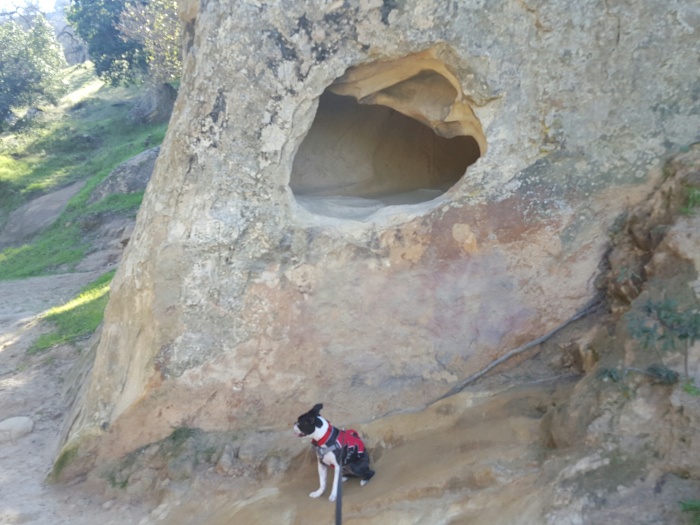 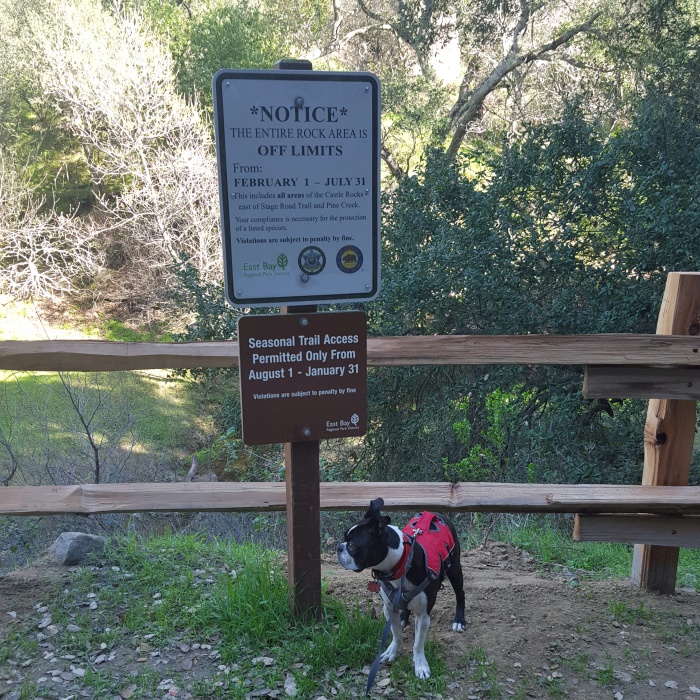 When you get to the Buckeye Ravine Trail ( about 1 and 1/8th mile), don’t take it immediately, if you look ahead on the Stage Road Trail path, you will see a viewing bench up a little hill on the right, if you can’t see it, just keep going on Stage Road Trail til you see it, it is not far from the intersection with Buckeye Ravine. This bench offers a magnificent view of the American peregrine falcon nesting area, and has an info sign. 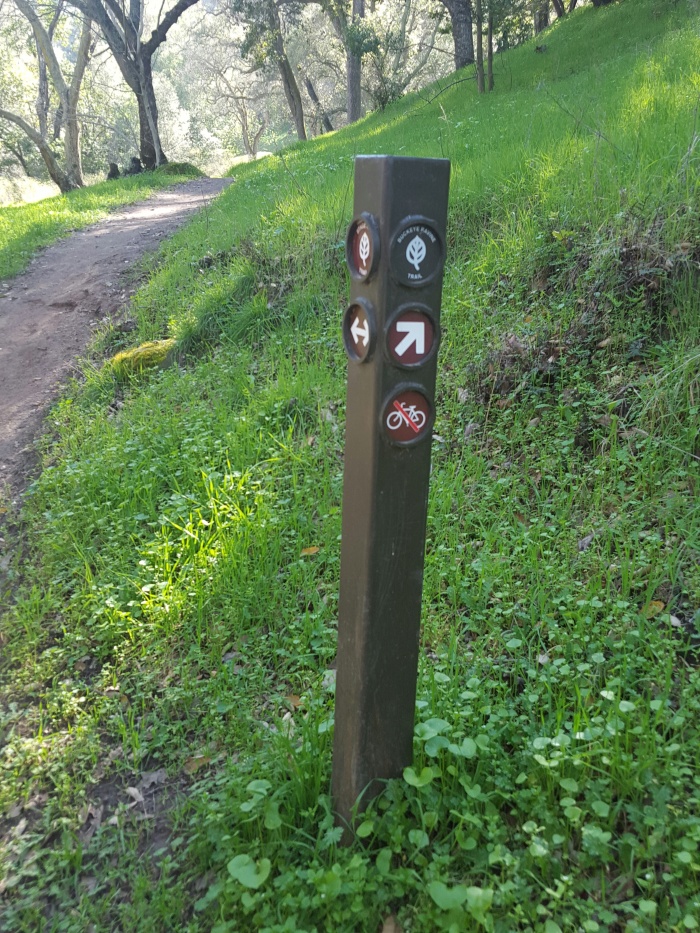 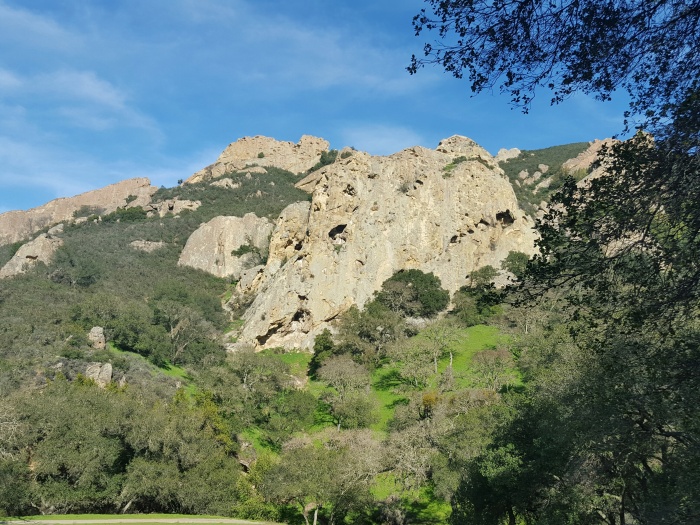 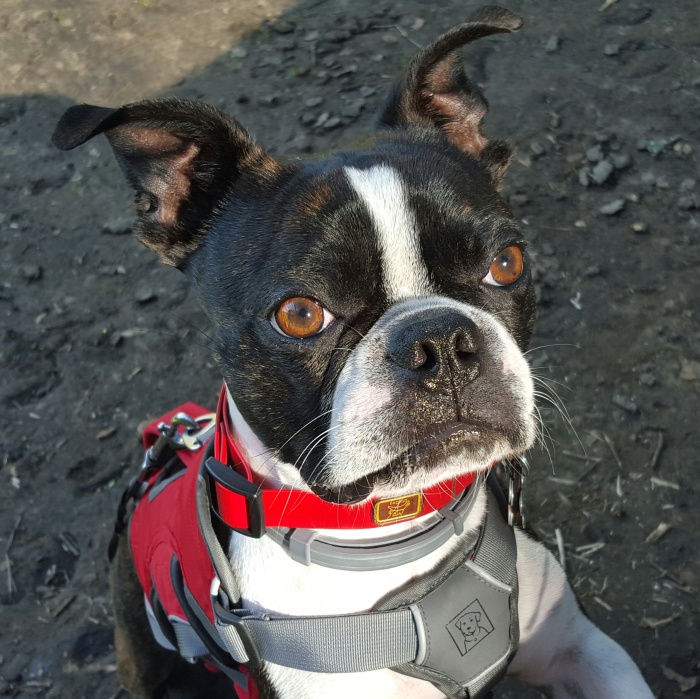 Back to the intersection with Buckeye Ravine Trail, there is only one way to go, up 🙂  This  beautiful single path trail is mostly shady, with a good ascent. When you get to the top you are rewarded with awesome rolling green hills, and a couple trail choices. There are also more views of the Castle Rock Area, and dynamic views of the Bay Area. 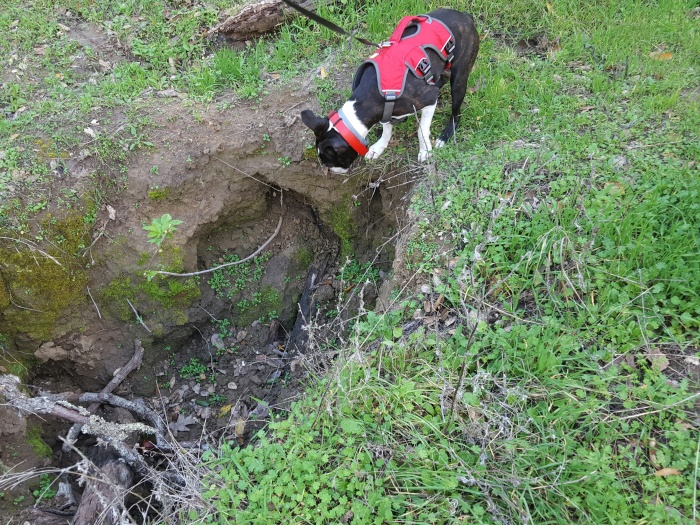 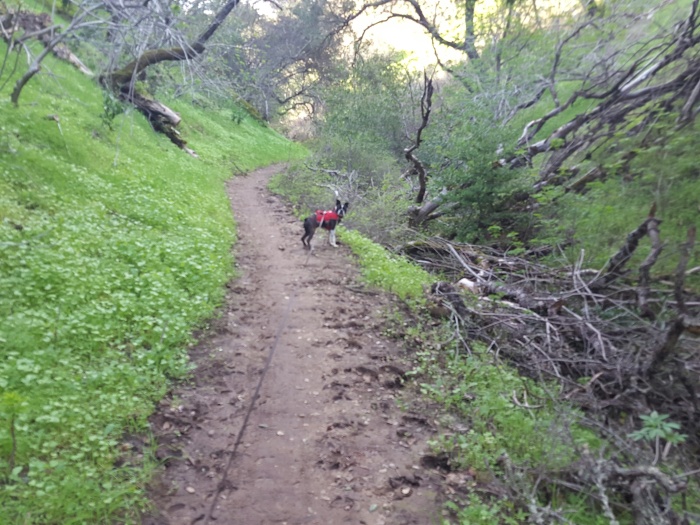 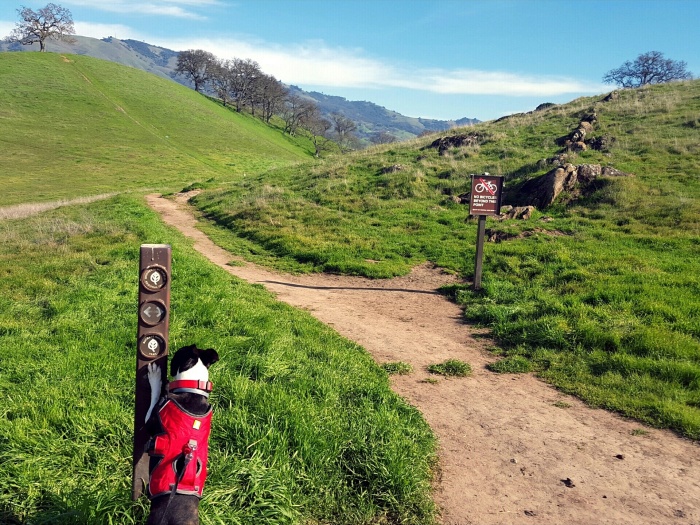 When you get to the top turn right to stay on Buckeye Ravine Trail, there are a couple different trail head markers up here close together. For a short distance, Buckeye Ravine Trail also shares the same path as the  Briones to Mt. Diablo Regional Trail, and is also part of the 300 mile long Mokelumme Coast to Crest Trail, and The American Discovery Trail which goes coast to coast. 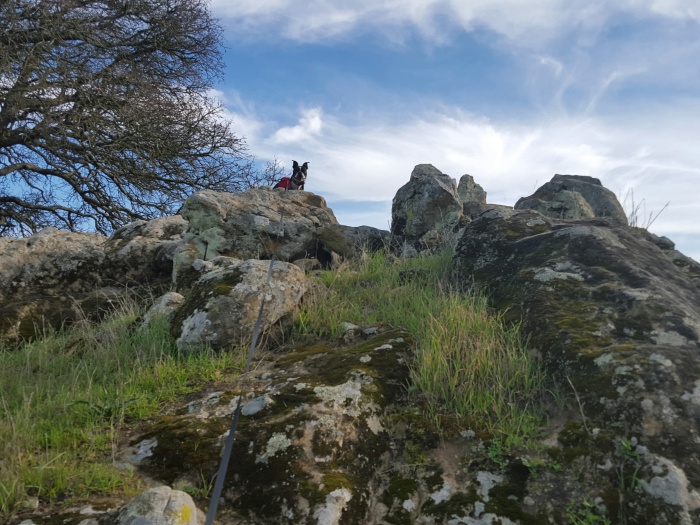 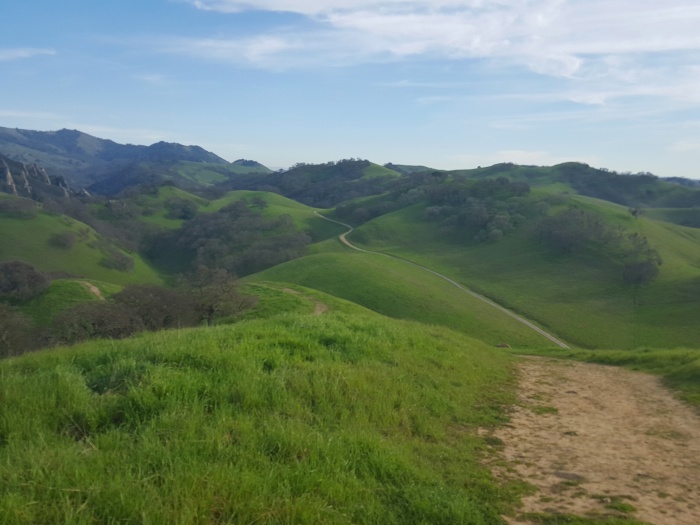 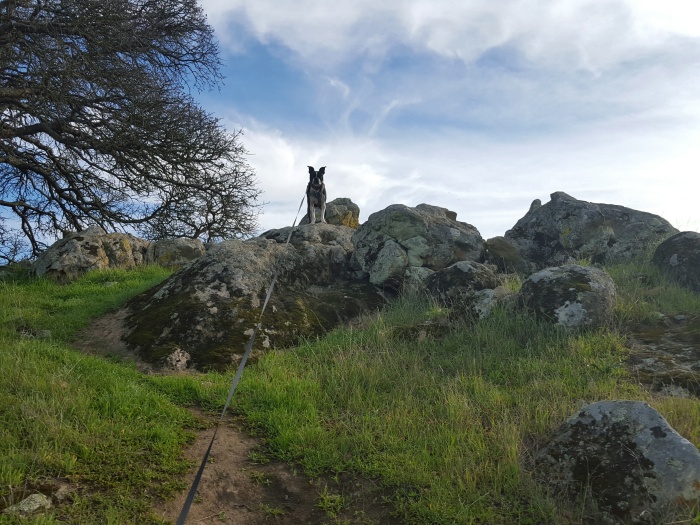 We stayed on this path a short ways until Fairy Lantern Trail, passing by the intersection where Buckeye Ravine trail continues on it’s own.No reason other than wanting to see that trail because of the name.  We turned right on Fairy Lantern Trail until we came to the Shell Ridge Trail, there is only one way to go. You’ll soon come across Shell Ridge Scenic Loop Trail which will also reconnect with Shell Ridge Trail before you get to Diablo Scenic Trail. We skipped the loop this time, but will do it next time.

Shell Ridge Trail offers some gentle rolling ups and downs, and then a pretty good ascent.  I was getting pretty hungry by this time, and had a nice sandwich in my bag that I was betting I could eat on a bench on that would be on or near the Diablo Scenic Trail, as the East Bay Regional Park is good at putting benches in places after you’ve conquered a hill, or scenic spots. I was right 🙂 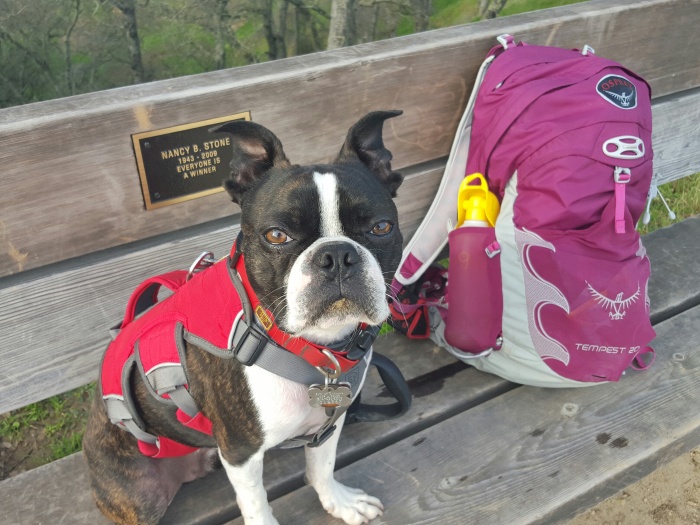 “Everyone is a Winner”

After a nice little break, we took Diablo Scenic Trail, there is only one way to go…down.  This was a pretty steep descent with some deep ruts, and I think it would’ve been easier with trekking poles. Chico tried to show me the best way, going first, and then coming back the same way so I could see.  And he is usually right! I also realized that I need new boots here, the tread at the ball of the foot area is pretty worn. I tried to capture a photo of the start of the decent, but it didn’t come out that great. 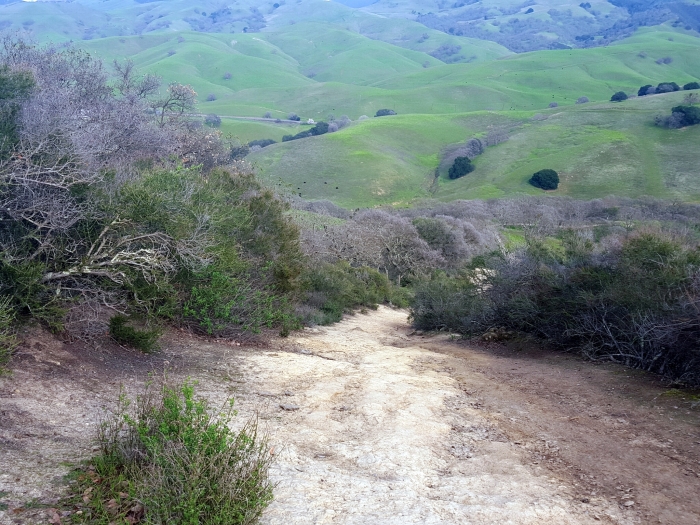 And down we go!

I started my hike app, at my car, and my 4.60 mileage may differ from yours as we also wander a bit to explore. My map below should give you a good outline to guide you as well. And I also included the park map. My app also said that we had a 999ft elevation gain, but boy it sure felt like more than that! Maybe because we had hiked the previous two days as well. Happy Trails! 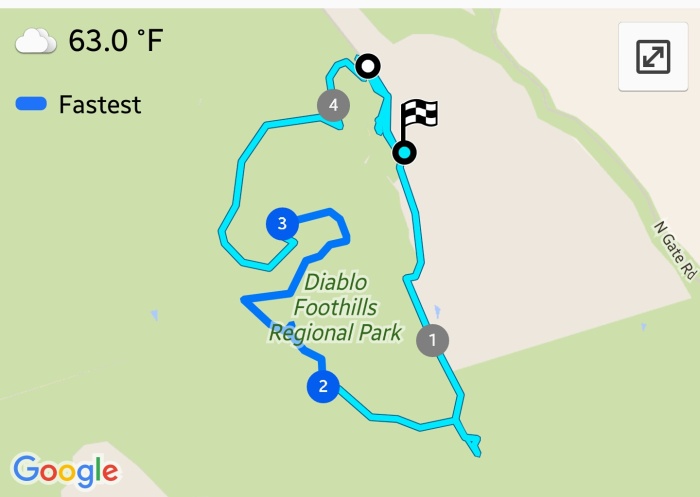